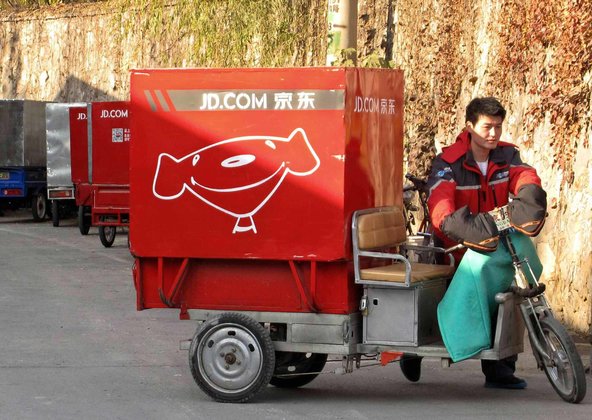 ReutersA courier in Beijing for JD.com.

The biggest test yet of American investors’ appetite for a Chinese Internet company has passed with flying colors — and it doesn’t involve the Alibaba Group, that country’s e-commerce giant.

Instead, JD.com, an online retailer aspiring to become China’s answer to Amazon.com, exceeded expectations for its initial public offering on Wednesday, raising $1.78 billion.

Even though the company has lost money for the last several years, its stock sale valued the company at $25.7 billion, a valuation even higher than Twitter’s at its market debut last fall.

The warm reception for JD.com reflects investor hunger for the wave of fast-growing Chinese companies that are going public in the United States to stake their claim as global technology powers.

The biggest of these budding titans remains Alibaba, something of an amalgam of eBay, Amazon and Google, whose astounding growth has inflated expectations for its forthcoming I.P.O. Analysts have speculated that Alibaba may be worth as much as $200 billion when it finally goes public, more than the value of Facebook or Amazon.

These Chinese companies have drawn intense interest because they offer shareholders a way to tap China’s enormous growth.

JD.com, however, is coming to market at a time when the once-torrid pace of technology I.P.O.s has slowed significantly amid concerns over high valuations. Some once-hot stocks, like the security firm FireEye, are trading below their offering prices.

But the allure of a fast-growing Chinese Internet company appears to have proved powerful: The number of orders for the retailer’s stock was 15 times oversubscribed, according to a person briefed on the matter. Shares in JD.com will begin trading on the Nasdaq on Thursday, under the symbol JD.

By many measures, JD.com is not nearly as big as Alibaba, whether by revenue or market value. But the retailer, whose backers include the Chinese mobile software giant Tencent, has established itself as a significant force in its home market on the back of its expansive online shopping empire.

JD.com, which began as a seller of electronics, now claims to be the biggest direct seller to Chinese consumers, with $20.7 billion worth of goods sold directly to customers last year.

Much of the company’s appeal lies in the relatively unconquered Chinese e-commerce market. In its prospectus, JD.com noted that less than 50 percent of the country’s population was online. And online shopping is expected to grow about 27 percent each year, according to the iResearch Consulting Group.

Though many investors have directly compared JD.com to Alibaba, the two operate differently. JD.com maintains a significant amount of product inventory and owns much of its shipping and logistics network, a business model that many have likened to Amazon’s core business.

But Alibaba serves primarily as a middleman between customers and sellers, akin to parts of eBay and Amazon. Alibaba’s is a much less expensive operating model that gives the company its eye-popping margins: Operating profits in the first nine months of its 2013 fiscal year amounted to 48 percent of revenue, a ratio that is the envy of Silicon Valley giants.

By contrast, JD.com has reported a loss in each of the last five years, even as its sales have ballooned. Last year, for instance, the company lost $8 million, despite racking up $11.5 billion in sales.

The company has instead reinvested significantly in its operations, following Amazon’s example and betting that investors will give it the same sort of leeway that they allow the American retailer. Among its biggest costs has been investing in a delivery network that offers same-day delivery in 43 Chinese cities.

Running such an operation is likely to be costly over time, though the company has argued that it reaps other benefits from that spending.

“It really has been able to control the customer experience,” said Kelland Willis, an analyst at Forrester Research.

JD.com also benefits from its association with Tencent, an Internet software company often considered the biggest rival to Alibaba. Tencent purchased a 15 percent stake in JD.com this spring, and it formally acquired an additional 5 percent on Wednesday in a transaction tied to the I.P.O.

The tie-up had benefits for both sides. JD.com took over much of Tencent’s e-commerce operations. It also gained access to something that may be even more valuable down the road: WeChat, the enormously popular messaging service that Tencent runs, which claims about 400 million monthly active users.

Already, about 18 percent of JD.com’s orders come via mobile devices.

“They’re integrated into the biggest messaging app in China,” Ms. Willis said. “It does give them an advantage.”

JD.com’s offering also will bestow wealth — both realized and on paper — on its existing investors. The biggest is the company’s founder and chief executive, Richard Qiangdong Liu, who will sell shares in the I.P.O., but will still control billions of dollars’ worth of its stock.

Other big winners are Western concerns including Tiger Global Management, an investment firm, and DST Global, the Russian investment concern. Both are also expected to keep multibillion-dollar stakes.

While those investors will benefit from the eagerness of newcomers, analysts have raised concerns about parts of JD.com’s structure, among them the unusual power the company’s founder will have. Thanks to his ownership of a second, much more powerful class of stock, Mr. Liu will continue to exert an enormous amount of control, wielding an effective 84 percent of the retailer’s voting power.

And analysts have questioned whether JD.com will be able to build itself into a colossus like Amazon.

“There’s so much suspension of disbelief by Americans investing in these companies,” Mr. Wallace of Triton said.

Still, he added, “This is just one of a handful of companies that have some scale and staying power in that market.”