A high-pressure zone that has been warding off rain for months has worsened air pollution across California and the Southwest.

Posted by Tony Barboza on Monday, January 20, 2014 Under: #HOODKNEWGLOBAL

A high-pressure zone that has been warding off rain for months has worsened air pollution across California and the Southwest. 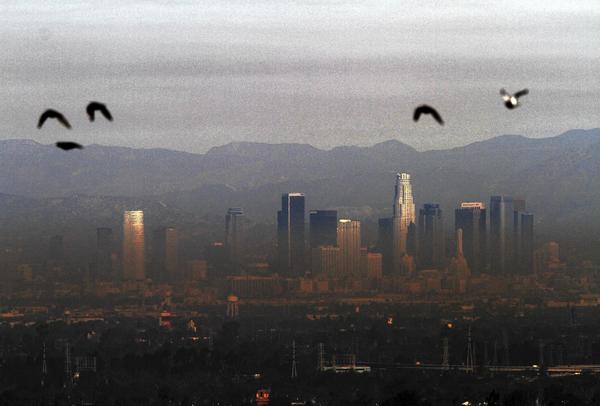 A high-pressure zone off the West Coast that has been warding off rain for months has worsened air pollution across California and the Southwest. The stagnant conditions have trapped fine particles close to the ground, leaving a buildup of sooty haze that poses a threat to people's health.

To keep pollution levels down, air quality officials in California have issued an unprecedented number of no-burn alerts that ban wood fires in homes. Even so, clinics report treating more patients who have trouble breathing, tightness in their chest, itchy eyes and runny noses.

"It's not just an inconvenience, it's a significant health issue," said Dr. Sunil Saini, an allergist in Upland. Saini said he typically sees a drop-off in patients with respiratory problems starting in December. "This year we haven't seen that decrease."

The region, with some of the dirtiest basins in the nation, usually counts on a few big winter storms to scour away pollution. Santa Ana winds and short-lived breezes have circulated the air a bit, but it hasn't been enough, air quality officials said.

Since last month, the Bay Area, the Central Valley and Southern California have contended with spells of dirty air that have not relented for days or even weeks.

Forecasters do not predict any rainstorms through the end of the month, which would make this California's driest January on record. Last year was California's driest calendar year in 119 years of record-keeping, and Gov. Jerry Brown declared a drought emergency on Friday.

Nowhere in the state has the air been worse than in the San Joaquin Valley, where pollution-trapping conditions have pushed daily averages of fine particles in Bakersfield, Hanford and other communities to more than triple the federal standard of 35 micrograms per cubic meter. The air has been so unhealthful at times that officials have issued dozens of Level 5 advisories, the highest on their five-point scale, and advised people to stay indoors. Some high school soccer games and swim meets were canceled or postponed.

"It's been terrible," said Dr. Alexander Sherriffs, a family physician in Fowler and a member of state and local air quality boards. "We're sitting in the soup, and it's not a healthy soup."

Winter nights and mornings tend to form strong inversions, in which a layer of warmer air traps cool air and pollution close to the ground. When fog blankets the surface, the humidity can speed up chemical reactions that convert nitrogen oxides and other gases from vehicle tailpipes, factories and ships into haze-forming fine particles.

Around San Francisco, such conditions have marred the Bay Bridge in a gray haze reminiscent of a smoke-filled bar. Episodes of stagnation since November have led Bay Area officials to call a record 29 days of "Spare the Air" alerts that prohibit home wood burning, with more on the way. Last winter season they called 10 such days.

"That gets put in jeopardy when you have extended periods with no rain," said Joe Cassmassi, the district's planning and rules manager.

Parched conditions also have raised the risk of fire, as many Southern Californians saw last week when a plume of smoke billowed out from a brush fire near Glendora, prompting air quality advisories.

Fine particles, a fraction of the width of a human hair, are among the most worrisome air pollutants to health experts because they lodge deep in the lungs and can aggravate respiratory problems. Long-term exposure is tied to a host of illnesses, including heart disease, asthma and cancer.

A 2010 report by the California Air Resources Board estimated that 9,200 people in the state die prematurely each year because of exposure to fine particle pollution, most of them in Southern California.

"It's very disturbing, the legacy of this," Sherriffs said.