Who says marijuana smokers are lazy? Despite cold temperatures and intemperate weather, Colorado raked in over $1 million dollars since regulated sale of marijuana became legal on January 1. Most shops reported long lines throughout the day, with some customers waiting outside for hours to purchase marijuana legally. Check out the full story and video below… 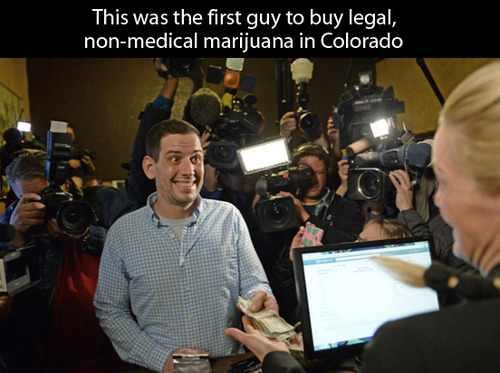 The first official sale of legalized marijuana went to Sean Azzariti, a former marine who uses bud to treat his Post Traumatic Stress Disorder (PTSD). There’s a price tag on the marijuana he bought but the look on his face?…priceless!

“It’s a huge deal for me,” Andre Barr told 9 News, “to be part of the legal weed experiment. This wait is nothing.”

Twenty-four shops opened on Wednesday, most of them in the Denver area, and according to Barbara Brohl, head of the Department of Revenue’s marijuana oversight division, “[e]verything’s gone pretty smoothly.”

The only potential problem is price inflation. High-quality marijuana that, on Tuesday, could only be sold to medical marijuana patients for $25 per one eighth of an ounce, was being sold on Wednesday to recreational users for $75 for the same amount.

Medical marijuana advocates hope that such inflation is just a temporary measure by pot shops to deal with the increased demand that followed legalization. – Via RawStory

Tags: colorado brings in over $1 million on first day of legalized weed operation [video]
« Back to posts