Dame Dash Hipped To Jewish Group Calling Blacks ‘Liquid Money: Because We Give It All Away’

Dame Dash Hipped To Jewish Group Calling Blacks ‘Liquid Money: Because We Give It All Away’ 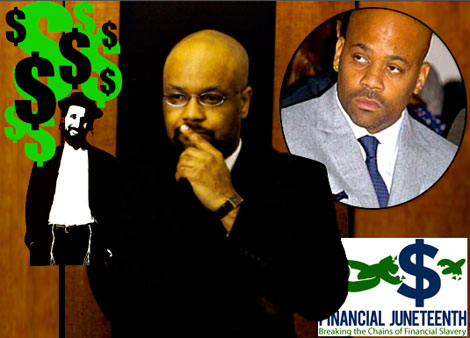 “The same way that water falls out of a man’s hands, money typically seeps out of a black person’s hands the same way. Your community gets money and immediately gives it all away to people who aren’t black.
We see that as a huge business opportunity.”

HSK Exclusive - Dame Dash has been identified as the “friend” Dr. Boyce Watkins was referring to in a “true story” — telling how one Jewish businessman revealed how he and his homeys see Blacks.

“Someone I know works closely with a Jewish businessman. One day, the two had an honest conversation, in which the Jewish man asked, “Do you know what my Jewish friends call the black community?” My friend said, “No,
what do they call us?” He replied, “We call you liquid money.” -Dr. Boyce Watkins

Dr. Watkins published the story through ‘Financial Juneteenth: Breaking the Chains of Financial Slavery’, about a week ago. We’ve since learned Dame shared the recent discussion with the good Doctor, sparking Watkins to expose Dame’s findings.

He [the Jewish businessman] then used the example of many black people on payday or when we get our tax refunds. He noted how we’ll go to an Indian business to cash the check, an Asian hair salon, a corner store owned by Arabs and a department store owned by whites. He explained how, when it’s all said and done, these other business people are waiting like hungry animals to eat our bank accounts as if we are the prey.

This is not an attack on Jewish people, but a lesson on how ignorant we look when we keep giving all of our money away. Part of the New Paradigm Construct is to help all of us understand the importance of finding ways to keep money in our own communities, the same way you plant a seed from a piece of fruit in order to grow more fruit in your garden. If you’re always waiting for someone else to feed you, you are typically an inch or two away from starvation.
It’s something to think about.

1) In America, you have no almost no power if you don’t own something. There is no pride in a platform on which you sit if it can be taken away from you on a second’s notice. You have been seduced into believing that you have real power, when the truth is that you do not.

2) If we never learn the value of supporting of black-owned businesses, we are always going to be disappointed. We are going to have the highest unemployment rates, the lowest wealth levels and the greatest degrees of frustration. When I had a three hour personal conversation with Min. Louis Farrakhan (followed by a nine-hour closed economic summit a month later), one point that he made (which I agree with entirely) is that black people can learn a great deal from watching how the Jewish community handles it’s wealth. In order for us to grow as a people, we must realize this important fact: Our money is our power and we cannot give it all away.

Does Dame Dash make it a point to “cut out the connect” and play “the Jewish guy behind it”? Of course! Just ask Jim Jones.

Tags: dame dash hipped to jewish group calling blacks ‘liquid money: because we give it all away’
« Back to posts