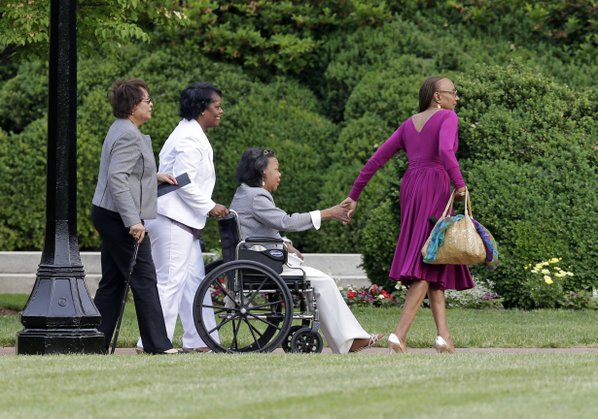 WINSTON-SALEM, N.C. -- Maya Angelou liked to say that people will forget what you said or did in your life, but they will never forget how you made them feel.

Former President Bill Clinton, first lady Michelle Obama and media personality Oprah Winfrey said Saturday that they were among the millions touched by Angelou's wisdom when they needed help to rise.

Family and friends gathered Saturday to remember one of the 20th century's most famous writers. Amid tears, laughter and gospel singing, they met at Wake Forest University, where she taught for 32 years although she never graduated from college. Dr. Angelou, as she liked to be addressed out of respect for all the honorary degrees she received, died May 28 at age 86.

Hers was a life that linked the worlds of civil rights, poetry, acting and teaching. Attendees recalled her impact during the 2-hour-long tribute.

"We could just all be up here talking about how Maya Angelou represented a big piece of American history. And triumphed over adversity. And proved how dumb racism is," Clinton said at the private memorial service. "But her great gift in her action-packed life was she was always paying attention. And from the time she started writing her books and her poetry, what she was basically doing was calling our attention to the things she'd been paying attention to. And she did it with a clarity and power that will wash over people as long as there is a written and spoken language."

Clinton said she seemed to pack five lifetimes into one.

Michelle Obama said that as a little black girl on the south side of Chicago whose Malibu Barbie doll was the standard of female perfection, Angelou's words changed her life.

"Her voice lifted me right out of my own little head," Obama told those gathered in the wooden pews of the main campus chapel. A large photo of Barack Obama awarding Angelou the Presidential Medal of Freedom in 2011 hung from the campus chapel's oak wall.

"She told us that our worth has nothing to do with what the world might say," the first lady said. "Instead, she said, each of us comes from the Creator trailing wisps of glory. She reminded us that we must each find our own voice, decide our own value, and then announce it to the world with all the pride and joy that is our birthright as members of the human race."

Tall and majestic, Angelou added heft to her spoken words with a deep and sonorous voice. She once described herself as a poet in love with "the music of language." She recited the most popular presidential inaugural poem in history, "On the Pulse of Morning," when Clinton opened his first term in 1993.

Clinton remembered that voice and how Angelou chose not to speak for five years after she was raped by her mother's boyfriend as a child.

"She was without a voice for five years, and then she developed the greatest voice on the planet. God loaned her His voice," Clinton said. "She had the voice of God. And he decided he wanted it back."

Winfrey said the close and constant friend she met before becoming a talk-show host could shake her out of bouts of self-doubt. Angelou taught her to look beyond trouble and spot the rainbow in the clouds, Winfrey said.

"Maya Angelou is the greatest woman I have ever known," Winfrey said, then almost sobbing: "She was my anchor. So it's hard to describe to you what it means when your anchor shifts."

Winfrey and Obama, seated next to each other in the chapel's front row, swayed in unison as Grammy-winning gospel singer Bobby Jones prompted hands to wave and clap. Actor and producer Tyler Perry assisted actress Cicely Tyson and former United Nations Ambassador Andrew Young to the podium before country singer Lee Ann Womack drew cheers with her hit "I Hope You Dance."

Angelou was born Marguerite Johnson in St. Louis and was raised in Stamps, Ark., and San Francisco. Her life included writing poetry by age 9, giving birth as a single mother by 17 and becoming San Francisco's first black streetcar conductor. She also sang on records, acted alongside James Earl Jones and earned a Tony nomination for her work on Broadway. She wrote music and plays, received an Emmy nomination for her acting in the 1970s TV miniseries Roots and danced with Alvin Ailey.

Angelou also worked as a coordinator for the Southern Christian Leadership Conference and lived for years in Egypt and Ghana, where she met South African liberation pioneer Nelson Mandela. In 1968, she was helping the Rev. Martin Luther King Jr. organize the Poor People's March in Memphis, where the civil-rights leader was slain on Angelou's 40th birthday.

Her son, Guy Johnson, said Angelou's last decade was filled with pain. She was in a wheelchair and used oxygen tanks. Still, she was able to write four more books, had all of her mental faculties and died quietly in her sleep.

"There is no mourning here," he said.

Information for this article was contributed by Jeffrey Collins of The Associated Press.