Posted by By RUSSELL BLAIR / rblair@courant.com on Sunday, September 7, 2014 Under: #EssexCounty 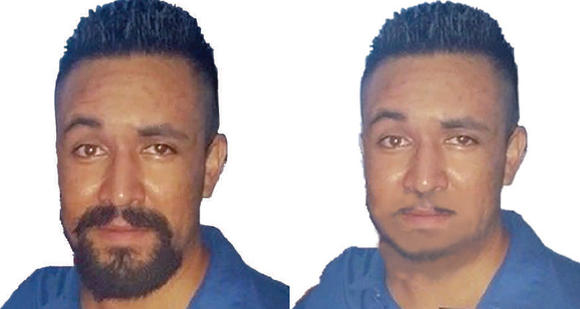 The photo on the left was taken in August 2014 and shows Edibaldo Duran, the suspect in a home invasion and sexual assault in Fairfield. But on the evening before the attack he shaved his goatee closely and may resemble the altered picture on the right, police said. (Courtesy of Fairfield Police Department / September 7, 2014)

FAIRFIELD — Police have identified a suspect in a home invasion and sexual assault at a Berkeley Road home last week.

Police said Saturday they obtained an arrest warrant charging Edibaldo "Eddie" Duran in connection with the Sept. 1 attack. A woman living in the home was awoken around 3 a.m., beaten, sexually assaulted and strangled until she became unconscious, police said.

Duran is described as 5-foot-2, approximately 150 to 160 pounds with dark, spiky hair, acne and "grayish eyes." He also speaks with a slight Spanish accent, police said. Duran may also be going by the name Eddie Guerrero.