Posted by The Associated Press on Tuesday, July 22, 2014 Under: #HOODKNEWGLOBAL

Egypt might be willing to amend its truce initiative to end the fighting in Gaza in order to accommodate the Palestinian militant movement Hamas, which had rejected its terms, three Egyptian officials told Reuters.

"Egypt does not mind adding some of Hamas' conditions provided that all involved parties approve," one senior Egyptian official said, without giving details.

Among Hamas's conditions are the lifting of the Israeli and Egyptian blockade on Gaza and the release of several hundred Palestinians arrested by Israel last month during its search for three Jewish teenagers abducted in the occupied West Bank. The trio were later found dead in a killing Israel blamed on Hamas.

Egyptian officials suspect Hamas rejected the ceasefire plan at the urging of Qatar, a strategic player in reaching an effective deal as host to a large number of exiled Islamists from across the Middle East, including Hamas leader Khaled Meshaal.

The possibility of a truce amendment emerges after the top Hamas leader in the Gaza Strip signalled Monday that the Islamic militant group will not agree to an unconditional ceasefire with Israel, while Israel's defence minister pledged to keep fighting "as long as necessary" — raising new doubt about the highest-level mediation mission in two weeks.

UN chief Ban Ki-moon and U.S. Secretary of State John Kerry had arrived in Cairo to try to renew ceasefire efforts aimed at ending the Israel-Hamas fighting that has killed at least 530 Palestinians and 20 Israelis and displaced tens of thousands of Gazans in the past two weeks.

The U.S. is also sending $47 million in humanitarian aid to the besieged Gaza Strip to help tens of thousands of Palestinians there who have been forced from their homes since war broke out two weeks ago. 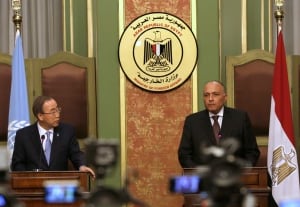 A State Department breakdown of the aid that was released Monday said nearly a third of the money — $15 million — will go to the United Nations' refugee mission in Gaza.

Despite the new diplomatic push, Israel continued to attack targets in the densely populated coastal strip from the air and from tanks, while Hamas fired more rockets and tried to infiltrate into Israel.

Seven Israeli soldiers were killed during clashes with Palestinian militants, the Israeli military said, lifting the army death toll to 25 — more than twice as many as in Israel's last Gaza ground war in 2009.

Local media had said there were a number of casualties when Palestinian fighters slipped under the Gaza border earlier in the day via a hidden tunnel. Two civilians have also died in Palestinian rocket attacks on Israeli cities.

A dozen shells hit the Al Aqsa hospital in the town of Deir el-Balah on Monday, said Palestinian health official Ashraf al-Kidra. He said four people were killed and 60 wounded when the shells landed in the administration building, the intensive care unit and the surgery department.

The Israeli military said it was looking into the report.

In one of several airstrikes, 25 people were buried under the rubble of a home in the southern town of Khan Younis, including 24 from the same family. Rescue workers pulled the bodies from the wreckage Monday.

No time limit to Gaza operation

Another Israeli airstrike hit the home of the Siyam family in southern Gaza, near the town of Rafah, said the Palestinian Center for Human Rights. The strike killed 10 people, including four young children and a nine-month-old baby girl, al-Kidra said. 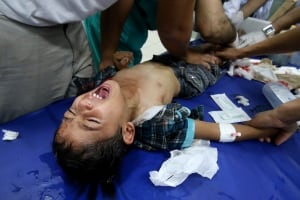 Palestinian medics tend to a boy who they said was wounded in an Israeli shelling of a hospital in Rafah in the southern Gaza Strip on Monday. (Ibraheem Abu Mustafa/Reuters)

Hamas militants, meanwhile, tried to sneak into Israel through two tunnels, the latest in a series of such attempts. The Israeli military said 10 infiltrators were killed after being detected and targeted by Israeli aircraft.

Hamas also fired 50 more rockets at Israel, including two at Tel Aviv, causing no injuries or damage. Since the start of the Israeli operation, Hamas has fired almost 2,000 rockets at Israel.

"The tank fire and the artillery fire is near constant," CBC News correspondent Paul Hunter reported today from Erez, Israel, near the northern border with Gaza. Erez is where the tunnels Hamas was using exited into Israel.

Canadian Foreign Affairs Minister John Baird, speaking by phone from London, told reporters today that Hamas can stop the shelling right now by agreeing to a ceasefire proposal advanced by Egypt and agreed to by Israel.

"I think you can just conclude there's one group that is fully and entirely responsible for this tragedy, and it is Hamas," he said. "They're responsible, and they can stop this at any moment."

"If needed we will recruit more reservists in order to continue the operation as long as necessary until the completion of the task and the return of the quiet in the whole of Israel especially from the threat of the Gaza Strip," Yaalon told a parliamentary committee.

Israel accepted an Egyptian call for an unconditional ceasefire last week, but resumed its offensive after Hamas rejected the proposal. 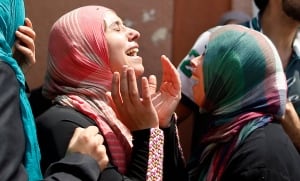 Ban and Kerry were in Egypt to try to salvage that ceasefire proposal.

Hamas, with some support from Qatar and Turkey, wants guarantees that Israel and Egypt will significantly ease a seven-year border blockade of Gaza before halting fire.

"The resistance [Hamas] will not respond to any pressure," Hamas spokesman Sami Abu Zuhri said in a text message, in a reference to the renewed ceasefire efforts.

Hamas remains deeply suspicious of the motives of the Egyptian government, which banned the Hamas-friendly Muslim Brotherhood a year ago and tightened restrictions on Gaza — to the point of driving Hamas into its worst financial crisis since its founding in 1987.

When asked about such conditions, Ban told reporters Monday in Cairo that "the best way at this time is to stop the violence and return to dialogue and address the root causes of the problems."

"I am asking again without any condition, they must stop," he said. "I know that this proposal by Egyptian government ... has been rejected because of certain conditions. If they really want to discuss all these conditions, they will take a very long time."

Sunday marked the single deadliest day in Gaza since the conflict erupted on July 8, with more than 100 Palestinians killed, according to Palestinian health officials. Most died in the first major ground battle of the conflict, in Gaza City's Shijaiyah neighbourhood, which Israel says is a major source for rocket fire against its civilians.

In response to the escalation, the UN Security Council expressed "serious concern" about the rising civilian death toll and demanded an immediate end to the fighting.

On Sunday afternoon, rescue workers making a last sweep through Shijaiyah had heard the voice of a woman under the rubble, pleading for help. 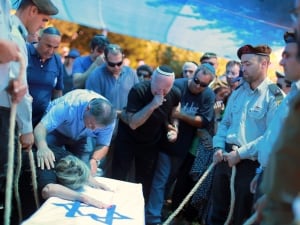 Sharona, the mother of Israeli soldier Tsafrir Bar-Or, leans on his flag-draped coffin during his funeral in Holon near Tel Aviv Monday. (Daniel Bar-On/Reuters)

The team left because it deemed the situation too dangerous, but returned later Sunday with a bulldozer to rescue the three people trapped underneath.

Seven-year-old Bissam Dhaher, her face bruised and bandaged, was recovering Monday at Gaza City's Shifa Hospital. Relatives watched over her as the girl slept. Her uncle remained hospitalized, while an aunt — the one who had called out for help — was released, relatives said.

On Sunday evening, Hamas spokesman Mushir al-Masri in Gaza claimed his group had captured an Israeli soldier. An announcement on Gaza TV of the soldier's capture set off celebration in the streets of West Bank.

But there was no official confirmation or denial of the claim in Israel.

For Israelis, a captured soldier would be a nightmare scenario. Hamas-allied militants seized an Israeli soldier in a cross-border raid in 2006 and held him captive in Gaza until Israel traded more than 1,000 Palestinian prisoners, some of whom were involved in grisly killings, for his return in 2011.