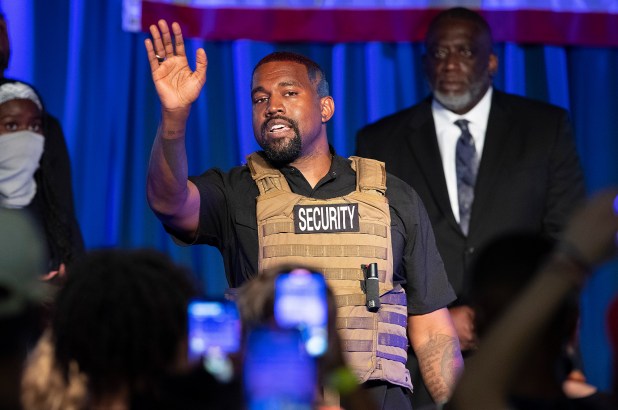 Rapper-turned-presidential candidate Kanye West has a financial empire worth at least several hundred million dollars spread around a slew of companies, according to a new federal filing Monday.

The hip-hop star and fashion mogul — who announced his bid for the presidency in July — reported stakes worth more than $50 million apiece in three of his Yeezy companies, said Business Insider, which obtained a copy of the filing with the Federal Elections Commission.

Kanye, the other half of “Kimye’’ as the hubby of reality-TV star Kim Kardashian, also has a stake in Adidas worth up to $50 million and another in Nike that totals as much as $25 million, documents show.

The rapper has loads of other stakes in additional ventures, too, including eight that have generated him more than $5 million a pop in the past year, the site said.

West’s financial interests are in every industry from music and fashion to construction and marketing — and he is in a leadership position at 29 different entities, according to the filing.

He has the rights to lucrative trademarks, as well, although their value is “not readily ascertainable,’’ the papers said.

Forbes has put the rapper’s wealth at $1.3 billion, although he claimed to be worth $5 billion last month.

As for debt, West lists liabilities of up to $100 million, mainly for mortgages, Insider said.

In September, his campaign reported having spent nearly $6 million so far.

Political candidates are required to periodically submit financial documents to the FEC, although the filings do not go particularly in-depth.

Since West announced his run for president on Twitter, he has struggled to get on the ballot in many states — while whipping up a firestorm of controversy over his bid.

The “Birthday Party” candidate, a President Trump supporter, has been accused of entering the race to siphon off votes from Democratic candidate Joe Biden.

He also has battled mental illness, suffering public breakdowns, including one in July, when he said on stage at a campaign rally that he and his wife considered aborting their daughter North.

Tags: here’s a look inside kanye west’s financial empire
« Back to posts