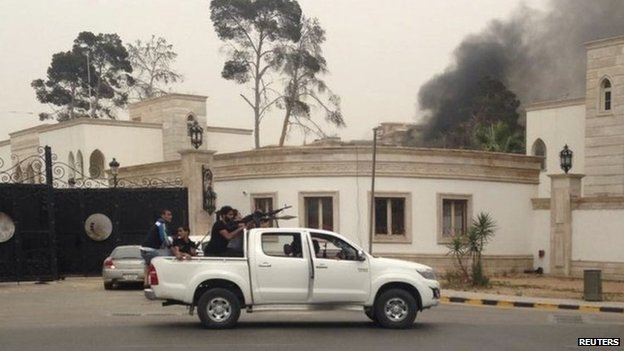 Smoke was seen rising from the parliament building in Tripoli

There has been heavy fighting outside the Libyan interim parliament in the capital Tripoli.

MPs fled the building after heavily armed attackers tried to storm it. Some eyewitnesses say the gunmen were from the powerful Zintan Brigade of former rebel fighters.

However, a paramilitary force backing retired general Khalifa Haftar claimed it was behind the assault.

Authorities are struggling to contain militias that control parts of Libya.

A planned new constitution remains unwritten and the country has had three prime ministers since March.

On Sunday, the gunmen launched their assault on parliament in armoured vehicles. Black smoke rose above the building as militiamen loyal to the government responded.

The building was largely empty, with reports that officials had been warned in advance and had left the area.

The BBC's Rana Jawad in Tripoli says the sporadic rumble of heavy arms being fired was heard across the city as the militiamen withdrew to their bases.

Later on Sunday, Gen Haftar's militia - which calls itself the "Libyan National Army" - issued a statement demanding the suspension of parliament.

On Friday the group launched a major air-and-ground attack against Islamist militants in the eastern of Benghazi.

The government condemned the attack and declared a no-fly zone in the city, threatening to shoot down any military aircraft.

At least 70 people died in the fighting.

Are you in Tripoli? Did you witness the fighting? Email us at haveyoursay@bbc.co.uk adding 'Libya' in the subject heading and including your contact details.

Or send us your eyewitness accounts using the form below.

Tags: libyan parliament comes under gunfire in tripoli bbc
« Back to posts