Posted by By Kate Mather and John Adams on Thursday, February 13, 2014 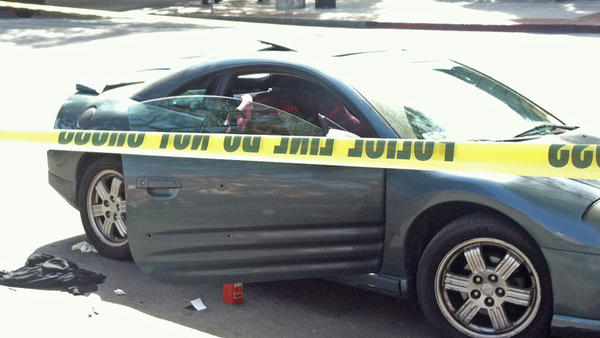 A car with three bullet holes in the door is cordoned off after authorities said it was involved in a car-to-car shooting in South Los Angeles. A man who was wounded in the incident drove to an entrance to USC. (John Adams / Los Angeles Times / February 12, 2014)

By Kate Mather and John Adams

A man who was wounded in a car-to-car shooting in South Los Angeles on Wednesday morning drove to an entrance to USC. Campus access at the gate was shut as the investigation continued.

An alert from USC said the man drove to the campus but was not affiliated with the school. Det. Mike Lorenz told reporters at the scene that the wounded individual was male but declined to give further information, citing the ongoing investigation.

Paramedics transported the man to an area hospital in stable condition, French said. Lorenz said the man had been "hit several times."

The gate was closed to vehicles and pedestrians until further notice, the university said.

Investigators remained on scene shortly before noon, surrounding the two-door car with police tape. The passenger door had been flung open, with bullet holes visible on the side.

"We're trying to piece everything together right now," Lorenz said.

An investigation into the incident is ongoing, but French said it initially was thought to be gang-related.

Tags: man shot in south l.a. drives to usc gate
« Back to posts