Hours after a public face-to-face meeting and brief discussion during halftime of Tuesday night's Miami Heat-Milwaukee Bucks game in Miami, Manny Pacquiao and Floyd Mayweather Jr. met privately for more than an hour to continue discussing terms for their proposed May 2 megafight.

They met inside Pacquiao's hotel suite and "it was very pleasant and very encouraging, and we give Floyd credit for coming over," Pacquiao adviser Michael Koncz, who was present at the meeting, told ESPN.com on Wednesday. "That's the first time they ever sat eye to eye. I've met Floyd many times, but he and Manny had never had a chance to meet. They talked at halftime, but this was a longer, more serious meeting. You could tell by their body language that this was very positive. It was for a good hour or more.

"It was a business meeting, but it wasn't a tense business meeting. I think that's because they both have mutual respect for each other. We'll determine what will happen over the next couple of days." 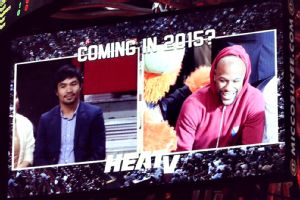 @MiamiHeat/Twitter After meeting publicly at the Heat-Bucks game, Manny Pacquiao and Floyd Mayweather Jr. met again privately for more than an hour.

The halftime meeting, which Pacquiao said was the first time he and fellow welterweight champion Mayweather Jr. met, resulted in an exchange of phone numbers and lit up social media as sports fans continued to hope this latest twist would get them closer to fighting each other.

The sides have been negotiating what will certainly be the richest fight in boxing history, but no deal has been struck yet. One of the issues is that Time Warner/HBO, which has a contract with Pacquiao, and CBS/Showtime, which has Mayweather under contract, need to hammer out terms for a joint pay-per-view telecast, which they did once before for the 2002 fight between then-heavyweight world champion Lennox Lewis and former champ Mike Tyson. They have been negotiating the terms.

"I told Floyd I would call [Pacquiao promoter] Bob [Arum of Top Rank] in the morning, and I did that and discussed them with Bob, and he assured us they have been worked out. I took care of it," Koncz said. "I said to Floyd, and Manny agreed, that if those are the only two broadcasting issues, we would take care of them."

Koncz declined to go into detail about the specifics of the issues because "I don't want to step on HBO's or Showtime's toes."

"I think people are just tired of all of this. Me and Manny, and maybe Floyd, we're tired of the fans and everybody, everywhere we go continually asking us when the fight will happen. Boxing needs this fight to happen, and it needs to happen in May."

Typically, a fight of this magnitude would kick off with a cross-country media tour to hype the event and get the word out. Koncz said Mayweather-Pacquiao is so big they don't need to do that.

"I don't want to go on a worldwide tour. We don't think it's necessary," he said. "Look, we could have stopped in seven cities and not gotten the kind of publicity we got from Manny and Floyd talking at halftime of the basketball game. "I think we could do one city, perhaps two, New York and Los Angeles, and this thing will go viral. It will sell itself. We don't need to go spending money on private jets to go to a lot of cities. Those tours are expensive. The money could go to the fighters instead. People want this fight and have wanted it for so long. I would have liked to see it happen three or four or five years ago, but hopefully we can get it done now. It will be the biggest fight in history."

Koncz said it was a coincidence that Pacquiao and Mayweather were both at the Heat game, with Mayweather next to the Heat bench and Pacquiao directly across from him on the opposite sideline. During their brief halftime meeting, Koncz said they exchanged cell phone numbers. Mayweather is a regular at Heat games. Pacquiao was in Miami to serve as a judge at the Miss Universe pageant this past Sunday night.

Koncz said they had planned to travel to New York after the pageant, but with a blizzard hitting the Northeast, they decided to stay in Miami for a few extra days. The unexpected meeting at the game, and later in the hotel, came during a critical time in the negotiations for the fight. Pacquiao wants any deal with Mayweather wrapped up by the end of January, the usual timeframe to promote a major May pay-per-view event.

Pacquiao (57-5-2, 38 KOs), the 36-year-old Filipino legend, and Arum have repeatedly said they have agreed to all of the terms outlined by Mayweather (47-0, 26 KOs), who turns 38 in February, during talks with CBS CEO Leslie Moonves, who has served as the go-between on behalf of Mayweather and his adviser, Al Haymon. Mayweather has said he intends to fight May 2 at the MGM Grand in Las Vegas, be it against Pacquiao or somebody else.

If the fight is not finalized, Arum told ESPN.com last week that Pacquiao's backup plan is to fight May 30, and he identified England's Amir Khan, a former unified junior welterweight titleholder and top welterweight contender, as the leading candidate for the bout.

There has been intense interest in a Pacquiao-Mayweather showdown since 2009, but various negotiations have fallen apart over the years. However, this round of talks, according to those involved, is the closest it has been since the initial negotiations in late 2009 and early 2010 broke down because of a disagreement over how to carry out the drug testing for the bout.

According to sources involved in this round of talks, they have agreed to the drug testing protocol, among many others aspects of the fight. Should they meet, the fight, worth hundreds of millions of dollars, is expected to shatter every revenue record in boxing history.