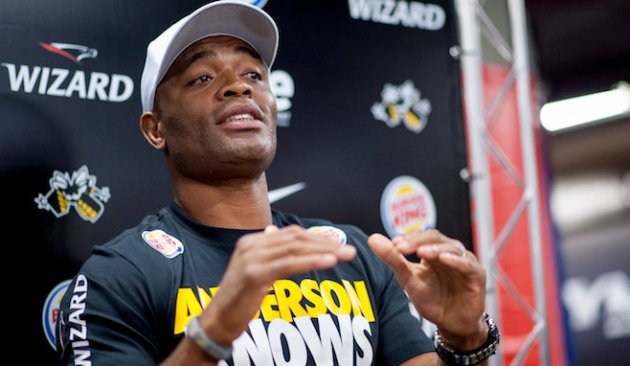 Contrary to popular thought, athletes can't sully great legacies by staying in the game too long and not knowing when to retire or stay retired.

They can damage their bodies and brains, perhaps, by not knowing when to quit but loving your craft so much you don't know when to stop is not a character flaw. Making excuses and vainly trying to diminish the accomplishments of your opponents, however, is a sure-fire way to tarnish even the shiniest legacy.

While we were busy wishing former UFC middleweight champion Anderson Silva a speedy and full recovery and hoping that he ultimately makes the best decision for himself on whether or not he should ever attempt a return to professional fighting after having his leg shattered by Chris Weidman last month, "The Spider" has begun to sully his reputation with delusional comments.

Silva was recently interviewed by Brazilian outlet Globo and MMA Fighting's Guilherme Cruz translated the fighter's comments. Barring any huge mix up in translation, it appears that Silva has taken an excuse-making, deluded note or two from former rival Chael Sonnen.

"I don’t think [Weidman should consider it a win]," Silva said.

"It was an accident. And I’m pretty sure I would have won the fight."

We love Anderson Silva. The all-time great might very well be the best mixed martial artist in history and he has nothing left to prove. That's why it is so frustrating to read such insecure words from the former champion.

Let's recap Silva's two fights with Chris Weidman. In the first round of the first fight, Weidman took Silva down with ease and then smacked him around on the ground.

After Weidman went for and missed a leg lock attempt, Silva got back to his feet. In the second round, Silva tried in vain to mount his own offense with strikes on the feet but could not find the bobbing and weaving Weidman (save for a few hard leg kicks. Let's remember those...) before getting knocked out by the challenger.

In the first round of their second fight, Silva was again taken down in the first round with ease. Once again, he was battered on his back. When he got back to his feet, Weidman actually knocked him out with a short right hand.

Anderson Silva was getting pummeled in his second fight against Chris Weidman before breaking his own leg. (USA …

The referee did not notice that Silva was out because once his head hit the mat after falling. Weidman hit him some more on the ground. When they got back to their feet in the second round, Anderson threw some leg kicks that Weidman checked.

One of those kick-checks shattered Silva's leg.

Over nearly four rounds, Weidman has dominated almost every second against Silva, knocked him down three times and out twice. If Weidman is "lucky" as Silva suggests, the Long Islander should invest all his money in lottery tickets.

"I can see some technical mistakes I did in the fight," he said.

"To land the perfect kick, I needed to distract him by punching him in the face so he wouldn’t pay attention to the kick. He was protecting the upper part of his body, and he raised leg instinctively. The kick was so strong he lost balance."

So, Silva is now bragging about the kick that may end his career? Saying that leg kick where he broke his own leg in two places was so strong it made Weidman lose balance is like bragging that you bruised a guy's fist when he knocked you out.

Silva is correct in saying that he did not set up his leg kicks with punches. We're not sure why that is supposed to be some major and new observation.

You set crosses up with jabs and kicks up with punches. That's not new to mixed martial arts.

For years, however, Silva has gotten away with not throwing his leg kicks behind punches and from the type of stance that one would ordinarily. He was so much better and quicker and stronger than every other opponent that he was able to get away with those slapping, not set up kicks for years.

Silva could not get away with that the second time around against Weidman, however, so he lost. The fact of the matter is that it appears that Weidman can beat Silva any number of ways, because he already has.

No shame in that for Silva. Weidman is a decade younger, much bigger and has a skill-set that matches up well against Silva.

"I saw my mistake, and now I’m only worried about my comeback," Silva went on.

We hope you heal up fully Anderson, and that, if you want to, you fight again. But please, stop wrecking the respect you've earned with your actions through classless words.