Posted by Dustin Nelson on Sunday, February 28, 2021 Under: #EssexCounty 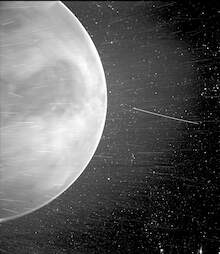 All eyes have been on Mars over the last week. Though, "all" is hyperbole because the eyes of NASA's Parker Solar Probe were on Venus.

On February 20, 2021, the probe did its fourth close flyby of Venus, getting a "gravity assist" from the planet to continue its study of the sun. Four days after the flyby, NASA shared a gorgeous image of Venus from an exciting and mysterious flyby that took place in July 2020.

As NASA notes in its announcement, the Parker Solar Probe is focused on studying our star, but Venus is playing an important role in its lifecycle. Over the course of its seven-year mission, Parker will make seven flybys, taking advantage of Venus' gravity to guide the probe's orbit. Though it's focused on the sun and studying solar winds, Parker's Wide-field Imager (WISPR) is capturing impressive images of the inner solar system along the way.

That includes this image of Venus' nightside on July 11, 2020, seen from 7,693 miles away. WISPR saw a bright rim around the edge of the planet, which could be nightglow -- "light emitted by oxygen atoms high in the atmosphere that recombine into molecules in the nightside," per NASA.

Images like this are beautiful and fun to look at, but they're also an important part of the science taking place with the mission. "This surprising observation sent the WISPR team back to the lab to measure the instrument's sensitivity to infrared light," NASA wrote in the announcement. "If WISPR can indeed pick up near-infrared wavelengths of light, the unforeseen capability would provide new opportunities to study dust around the sun and in the inner solar system. If it can't pick up extra infrared wavelengths, then these images... may have revealed a previously unknown 'window' through the Venusian atmosphere." This week's flyby took similar images to help further the research. The team hopes to have and process that data by the end of April. "Some exciting science opportunities await us," Vourlidas said.

Here are all the best stargazing events that you can get out and see this month or you could stay in a stream the northern lights from home. If you're just getting started, check out our guide to astronomy for beginners, the best meteor showers of 2021, or easy stargazing road trips from big US cities.

ou can also see the Aphrodite Terra, which is the largest highland region on the planet's surface. It's visible as the dark region across the center of the planet. It looks dark in this image because the Aphrodite Terra has a lower temperature -- about 85 degrees Fahrenheit -- than the surrounding region.

NASA says that this was unexpected. "WISPR is tailored and tested for visible light observations," said Angelos Vourlidas, a WISPR project scientist. "We expected to see clouds, but the camera peered right through to the surface."

Tags: nasa solar probe captures beautiful view of venus during a flyby
« Back to posts