Posted by GILLIAN FLACCUS on Tuesday, January 14, 2014 Under: #HOODKNEWGLOBAL

SANTA ANA, Calif. (AP) — Two California police officers who were videotaped in a violent struggle with a homeless man during an arrest were acquitted Monday of killing him.

It was a rare case in which police officers were charged in a death involving actions on duty. One of the officers acquitted had been charged with murder.

Jurors took less than two days to reach their verdicts.

The arrest was captured on a 33-minute surveillance video that was key evidence at the trial. It showed Kelly Thomas struggling with six police officers, who hit, kneed and jolted him with an electric stun gun as he was on the ground, calling out for his father over and over again.

Former Fullerton police Officer Manuel Ramos was acquitted of second-degree murder and involuntary manslaughter in the 2011 death of Thomas.

Former Cpl. Jay Cicinelli was acquitted of involuntary manslaughter and excessive use of force.

Spectators let out a gasp as the verdict was read.

Cicinelli, 41, wiped tears from his eyes and Ramos, 39, put his head down and rubbed his temples before turning to his supporters and winking.

Cicinelli's attorney pounded the defense table twice before embracing his client in a bear hug.

Orange County District Attorney Tony Rackauckus, who tried the case himself, said after the verdicts that charges will be dropped against Joseph Wolfe, a third officer awaiting trial.

"Just horrified," Cathy Thomas said. "He got away with murdering my son." 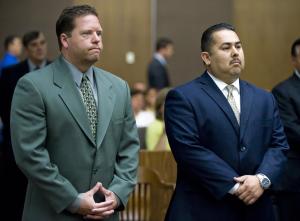 "All of us need to be very afraid now," he said. "Police officers everywhere can beat us, kill us, whatever they want, but it has been proven right here today they'll get away with it.

"These peace officers were doing their jobs," he said. "They were operating as they were trained, and they had no malice in their hearts."

The defense said Thomas started the confrontation by refusing to heed police orders and was fighting officers so much that they called for backup multiple times. At one point, the lawyers said, Thomas tried to reach for Cicinelli's stun gun.

Ron Thomas has countered that his son suffered from schizophrenia and didn't understand the officers.

The FBI said after the verdict that it will investigate to determine whether to take federal action against the officers.

"With the conclusion of the state court trial, investigators will examine the evidence and testimony to determine whether further investigation is warranted at the federal level," said Laura Eimiller, the FBI's spokeswoman in Los Angeles.

The video began with Ramos stopping Thomas on July 5, 2011, after the officer answered a call about a disheveled man jiggling the handles of car doors in a busy transit center parking lot.

Ramos grew frustrated with Thomas, who wasn't following orders to sit on a curb with his hands on his knees.

Just before the altercation began, Ramos snapped on plastic gloves, made two fists and then held them in front of Thomas' face as he said, "Now see these fists? They're going to (expletive) you up."

Cicinelli, who arrived a few moments later, jolted Thomas several times with an electric stun gun and used the butt end to hit Thomas in the head and face, breaking bones.

A county pathologist concluded that Thomas died, in part, from asphyxiation caused by injuries he received during the confrontation.

Defense attorneys said Thomas suffered from an enlarged heart from drug abuse, and his exertions during the struggle were too much for him.

Thomas' death led to days of protests in Fullerton, a Southern California college town, forced the recall of three City Council members and led the police chief to step down.

Several dozen protesters gathered outside the courthouse after the verdict waving signs, and a similar size crowd gathered at the scene of the struggle later Monday night. Both demonstrations were peaceful and there were no reported arrests.

During the trial, the defense told jurors that Thomas was not a peaceful, helpless man. They said he had a history of drug use and was homeless because he had attacked members of his own family.

Cathy Thomas testified that he choked her for several minutes during an argument and Thomas's grandfather said Thomas attacked him with a fireplace poker in 1995.

He did not have any drugs or alcohol in his system the night of the incident.

Only a handful of police officers nationwide have been charged with murder for actions taken while on duty, and convictions in those cases are rare, said Lawrence Rosenthal, a law professor at Chapman University School of Law and a former federal prosecutor.

Unless the prosecution can prove the officers falsified reports or covered up evidence, jurors are usually willing to acquit, he said.

"Police officers are very unusual kinds of defendants because ... they are seen as acting not in their own interests but acting to protect the public at large, the very people sitting on their jury," Rosenthal said.

Jurors are willing to forgive lapses in judgment rather than put an officer "in the cage with the same people that officer has spent his life arresting," he said.

Tags: officers acquitted in california homeless death
« Back to posts