Posted by MARC SANTORA on Wednesday, March 12, 2014 Under: #HOODKNEWGLOBAL

Right after the explosion image

Now: Photo of #Manhattan collapse. #FDNY has 39 units and 168 members responding. The scene is developing. 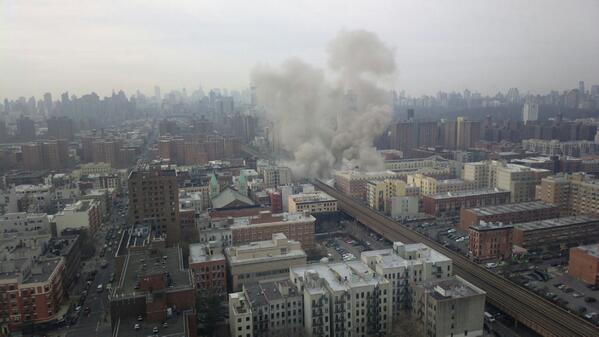 A building collapsed in East Harlem on Wednesday morning and authorities were responding to reports of people trapped in the rubble, according to fire officials.

Witnesses reported hearing what sounded like an explosion before the building collapsed. Flames and smoke could be seen billowing from the street, and video from the scene showed broken windows in neighboring buildings.

The authorities closed 116th Street from Fifth Avenue to Lexington Avenue. The exact location of the building and the cause of the damage were unclear.

Dozens of firefighters were working to extinguish the fire as paramedics came to the scene. At least 11 minor injuries were reported.

“It was complete shock,” one young woman told WNBC. “It shook my building so hard that I literally thought my building was falling down.”

The woman said she lives around four buildings away, she said, and right after the explosion, she said people began running, unsure of what was happening.

Metro-North Railroad service was suspended, officials said, since debris from the building landed on the elevated train tracks on 116th Street and Park Avenue.

Fire officials said that they had reports of a fire and building collapse around 9:30 a.m. and were just arriving on the scene. They cautioned that many details remained unclear.

Video footage from news helicopters showed the roof of the building as completely collapsed.