Posted by Greg Botelho and David Mattingly on Friday, January 10, 2014 Under: #HOODKNEWGLOBAL

Boiling Spring Lakes, North Carolina (CNN) -- A North Carolina detective justifiably shot a schizophrenic 18-year-old because he believed another officer's life was in danger, a group representing police officers said, offering an account vastly different from that of the late teen's outraged family.

The North Carolina Police Benevolent Association laid out its version of what happened in Boiling Spring Lakes in a statement issued Wednesday, three days after Keith Vidal was killed.

The most salient part was its defense of a Southport police detective for shooting Vidal after, in its view, determining that the teenager posed a "deadly threat" to another officer. The professional organization represents both these officers but not a sheriff's deputy also at the scene.

"(The) detective ... employed authorized law enforcement action to stop the continuing threat of deadly harm to (the officer) and others," the Police Benevolent Association concluded.

The Southport detective's lawyer, W. James Payne, has told CNN affiliate WWAY that once investigations into the shooting are complete, "All folks -- everybody -- will conclude that the officers acted appropriately."

Payne elaborated to CNN on Wednesday night, claiming that his client fired after Vidal made multiple attempts to stab the other officer with a screwdriver. The other officer was wearing a bulletproof vest and was not injured. 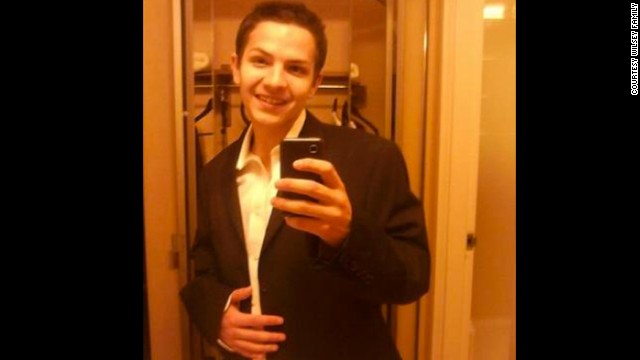 Photos: 'He was a good kid'

Wednesday's statements are the most detailed public defense yet of the law enforcement officers involved in Sunday's incident.

"We can say, based on our preliminary findings, that we are very confident that the officers did what they should have under state law," the law enforcement trade association's director, John Midgette, said Wednesday night. "It's a very tragic situation, but we do believe the officers."

Vidal's family has offered a starkly disparate view in its pleas this week for justice, as they see it, by holding the Southport detective directly responsible.

"My brother just needed help, and now he is dead," stepbrother Mark Ryan Wilsey said in an emotional video posted to CNN iReport.

Wilsey was not there when his stepbrother was shot but wanted to speak on behalf of his family, he said Wednesday.

"This officer who shot my son needs to be behind bars," said Vidal's mother, Mary Wilsey. "He needs to die the way my son died."

CNN first learned of the shooting through an iReport sent by a family friend.

According to Mark Ryan Wilsey, Vidal had schizophrenia and "was having an episode" when his father contacted police to subdue him so he could get help.

"He's not doing very good. You've got to get him someplace," a man who identified himself as Vidal's stepfather said on a 911 call, a copy of which was obtained by CNN affiliate WECT. "He wants to fight his mother. ... She's scared to death of him right now."

The caller said that Vidal "won't take his medication" and his family has had "to put him in before, (and) he's getting real bad again."

Mark Ryan Wilsey said Wednesday that Boiling Spring Lakes police were familiar with Vidal, having gone to the family's house at least three times before.

And the family has no qualms with the first two law enforcement officers who responded -- one from Boiling Spring Lakes police and the other a Brunswick County Sheriff's deputy -- with the stepbrother saying they "did nothing wrong."

"All they did was taze my brother and try to get him into handcuffs so he couldn't harm himself," said Mark Ryan Wilsey, who wasn't at the scene but relayed his family's account. "They had the situation under control."

But the family says the situation unnecessarily took a turn for the worse when the Southport detective arrived.

Stepfather Mark Wilsey told WECT that Vidal had been tased and was pinned when one of the officers said, "We don't have time for this" and fired his gun.

Seventy seconds after the third officer arrived, WECT reported, citing police records, police radioed that the teenager had been shot in self-defense.

Boiling Spring Lakes police and the Brunswick County Sheriff's Office have both cleared their officers involved in the case after finding, in internal reviews, no evidence they'd violated policy or state law.

Southport police put its detective -- the man the benevolent association says shot Vidal -- on paid administrative leave, a step that Midgette said is standard for any officer involved in a fatal shooting. Police Chief Jerry Dove said Wednesday that the detective's record is spotless, adding that his department hasn't had an officer-involved shooting in about 20 years.

Asked about his detective's judgment in shooting an 18-year-old who his family said weighed about 100 pounds, Dove said, "Well, that's what I'm waiting for when I hear all the inquiries that are made."

Specifically, the State Bureau of Investigation and the chief prosecutor for the state's 13th Judicial District are both looking into the matter.

The North Carolina Police Benevolent Association said it "welcomes" these investigations, but at the same time that it "assigned local counsel" to look into the matter. Its director, Midgette, explained this investigation consisted of talking to two officers involved who are members of -- and thus represented by -- his association.

The group said that three officers from three agencies responded to Vidal's house "due to the dangerous nature of the call."

Vidal "failed to comply with repeated requests to surrender the deadly weapon," which the 911 caller said was a screwdriver, the Police Benevolent Association reported.

What the officers did next -- such as using a Taser -- were "authorized and necessary law enforcement procedures ... to promote safety for everyone involved, including Vidal," the group added.

The detective fired after Vidal "made physical contact with the (Boiling Spring Lakes officer) using the hand holding the deadly weapon," the police association said in its statement.

"The officers present realized the immediate and deadly threat to (the officer's) life," said the group.

The pain and perhaps anger felt by Vidal's family is understandable. Yet Midgette said that it is important to understand too that the challenges faced by law enforcement, who sometimes have to decide, in a split second, whether they need to act to save their, one of their colleagues or someone else's life.

"Officers struggle every time they are put in a situation like this, because they are human beings, too," said the state benevolent association's leader. "It is always a tragedy, no matter how justified (the use of force) might be."