After decades of sexual abuse allegations, R. Kelly has been held legally accountable for the first time. The 54-year-old R&B singer was found guilty on all counts with a Brooklyn, N.Y. jury of seven men and five women returning the verdict on Monday afternoon after less than two full days of deliberations.

Kelly was found guilty on one count of racketeering and eight counts of violating the Mann Act, an interstate anti-sex trafficking law. He stood accused of sexual exploitation of a child, bribery and kidnapping among other disturbing crimes.

According to the New York Times, the "I Believe I Can Fly" crooner "sat motionless in the courtroom" when the verdict was read. He wore a mask in court due to COVID-19 safety protocols. An attorney for Kelly said they are "disappointed" in the verdict.

"Today's guilty verdict forever brands R. Kelly as a predator who used his fame and fortune to prey on the young, the vulnerable and the voiceless for his own sexual gratification," Jacquelyn M. Kasulis, acting U.S. Attorney for the Eastern District of New York, said in a statement. "A predator who used his inner circle to ensnare underage girls and young men and women for decades in a sordid web of sex abuse, exploitation and humiliation. To the victims in this case, your voices were heard, and justice was finally served. We hope that today's verdict brings some measure of comfort and closure to the victims." 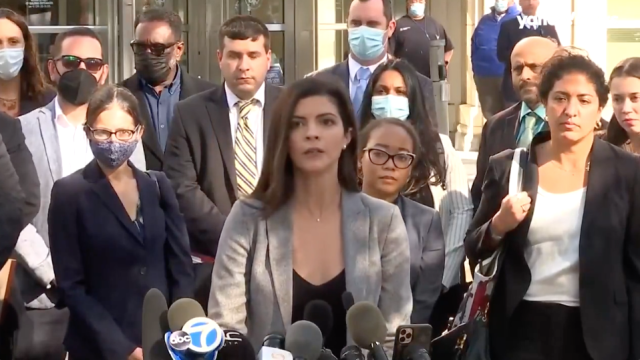 After a jury found singer R. Kelly guilty of racketeering and sex trafficking, acting U.S. Attorney for the Eastern District of New York Jacquelyn Kasulis called the singer a “predator” and praised the singer’s accusers by saying “this conviction would not have been possible without the bravery and resilience of R. Kelly’s victims.”

The singer, who has long denied misconduct allegations against him, was accused of sexually abusing women, girls and boys. Prosecutors argued Kelly "used lies, manipulation, threats and physical abuse to dominate his victims" and that his inner circle "served as enablers for his criminal conduct" while he ran his criminal enterprise. The government claimed Kelly took advantage of his fame to recruit his victims as many were aspiring singers and fans.

Kelly issued "Rob's rules" that many of his sexual partners were required to follow, according to testimony, including that the women and girls were to call him "Daddy" and get permission to eat or go to the bathroom. He isolated them from friends and family to make them dependent on him for their financial well-being, prosecutors said. He required most victims to engage in sex with him and others and recorded many of the sexual encounters.

The nearly six-week trial saw 11 accusers take the stand against Kelly, six of whom were minors when the alleged abuse took place. Two were male. He was directly charged for crimes related to just six women who formed the government's case, one being the late singer Aaliyah. Prosecutors claimed the two were illegally married when he was 27 and his protégé was 15.

Although Kelly was dogged by misconduct allegations for years, many of his victims felt he would never face consequences.

In 2008, Kelly was acquitted of child pornography charges in Chicago after he was accused of making a sex tape with an underage female. While the #MeToo movement saw the downfall of many prominent men, it was 2019's Surviving R. Kelly that brought renewed public interest to his predatory behavior. Many of the women who participated in the Lifetime documentary testified during the trial. The filmmaker behind the series reacted to Monday's verdict, tweeting she's "grateful to the survivors."

Kelly still faces state and federal indictments in two other states on similar charges. He will be sentenced in Brooklyn federal court on May 4, 2022.

Tags: r. kelly found guilty on all counts in sex-trafficking trial  faces decades in prison
« Back to posts