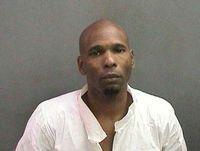 After less than a day of deliberations, a jury on Tuesday convicted a Garden Grove real estate agent of shooting two people in order to steal a Lexus, an execution-style double murder that could bring him the death penalty.

Prosecutors said Hilbert Thomas, now 42, entered Golden Sun Homes in Stanton in early February 2009, forced two employees to their knees, and shot them in the head.

The victims were secretary Elizabeth Ann Palmer, 49, of Fountain Valley, and Matthew F. Scott, 42, of Anaheim, a salesman at the mobile home sales company. Prosecutors said Thomas had just been hired by a real estate firm in Lakewood and was frustrated that he didn’t have a nice car to drive customers around in.

Prosecutors said he stole the keys to Palmer’s Lexus and drove the car around for months, with a dealer sticker in the window to deter suspicion. Thomas lived just a block and a half from the crime scene, but Orange County Sheriff’s Department detectives struggled to solve the case until October 2009, when an officer spotted the Lexus at an Anaheim hotel and checked the vehicle identification number.

An Orange County Superior Court jury found Thomas guilty of two felony counts of murder, with special circumstances for multiple murders, and murder during the commission of a robbery and a burglary. He was also convicted of robbery, burglary and car theft.

The case now shifts to the penalty phase, during which the same jury will have to decide whether Thomas deserves the death penalty or life in prison. Opening statements in that phase are expected to begin next Tuesday.