The devastating wildfires scorching Southern California offer a glimpse of a warmer and more fiery future, according to scientists and federal and international reports.

In the past three months, at least three different studies and reports have warned that wildfires are getting bigger, that man-made climate change is to blame, and it's only going to get worse with more fires starting earlier in the year. While scientists are reluctant to blame global warming for any specific fire, they have been warning for years about how it will lead to more fires and earlier fire seasons.

"The fires in California and here in Arizona are a clear example of what happens as the Earth warms, particularly as the West warms, and the warming caused by humans is making fire season longer and longer with each decade," said University of Arizona geoscientist Jonathan Overpeck. "It's certainly an example of what we'll see more of in the future." 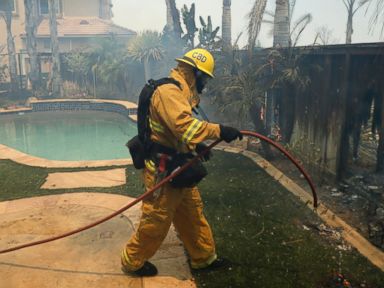 Since 1984, the area burned by the West's largest wildfires — those of more than 1,000 acres — have increased by about 87,700 acres a year, according to an April study in the journal Geophysical Research Letters. And the areas where fire has been increasing the most are areas where drought has been worsening and "that certainly points to climate being a major contributor," study main author Philip Dennison of the University of Utah said Friday.

"We are going to see increased fire activity all across the West as the climate warms," Dennison said.

That was one of a dozen "key messages" in the 841-page National Climate Assessment released by the federal government earlier this month. It mentioned wildfires 200 times.

"Increased warming, drought and insect outbreaks, all caused by or linked to climate change have increased wildfires and impacts to people and ecosystems in the Southwest," the federal report said. "Fire models project more wildfire and increased risks to communities across extensive areas."

Likewise, the Nobel prize winning Intergovernmental Panel on Climate Change noted in March that wildfires are on the rise in the western U.S., have killed 103 Americans in 30 years, and will likely get worse.

The immediate cause of the fires can be anything from lightning to arson; the first of the San Diego area fires, which destroyed at least eight houses, an 18-unit condominium complex and two businesses, seemed to start from sparks from faulty construction equipment working on a graded field, said California Department of Forestry and Fire Protection spokeswoman Lynne Tolmachoff.

But the California fires are fueled by three major ingredients: drought, heat and winds. California and Arizona have had their hottest first four months of the year on record, according to National Weather Service records. Parts of Southern California broke records Thursday, racing past 100 degrees. For the past two weeks the entire state of California has been in a severe or worse drought, up from 46 percent a year ago, according to the U.S. drought monitor.

"With the drought this year, we're certainly going to see increased frequency of this type of event," Dennison said. "Because of the drought the fuels (dry plants and trees) are very susceptible to burning."

Another study last month in Geophysical Research Letters linked the ongoing drought to man-made climate change. Other scientists say that is not yet proven.

Scientists will have to do a lot of time-consuming computer simulations before they can officially link the drought to climate change. But Overpeck said what is clear is that it's not just a drought, but "a hot drought," which is more connected to man-made warming.

The other factor is the unusual early season Santa Ana winds, whose strength is a key factor in whipping the flames. So far, scientists haven't connected early Santa Ana to climate change, Dennison said.

Tags: studies: wildfires worse due to global warming
« Back to posts