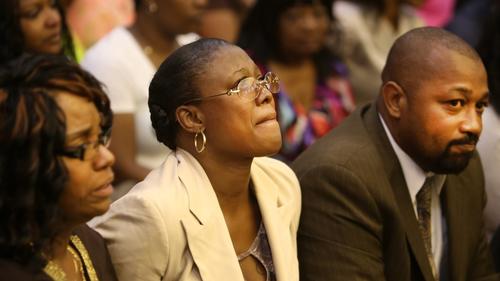 A tearful judge on Wednesday sent a white Michigan man to prison for at least 17 years for fatally shooting an unarmed black teenager on his front porch in a racially charged case that sparked protests in the Detroit area.

That means he will serve at least 17 years in prison before being eligible for parole, and a maximum of 32 years.

[Get Your Newspaper Delivered To Your Inbox Every Day with eCourant]

"This (is) one of the saddest cases," said Hathaway, who teared up as she delivered the sentence after an emotional hearing. "An unjustified fear is never an excuse to take someone's life."

Wafer's private attorney, Cheryl Carpenter, said he would appeal the conviction and has requested a public defender to handle the appeal.

Wafer shot and killed Renisha McBride, 19, who was intoxicated and had been involved in a car crash when she banged on his front door in suburban Dearborn Heights early on a rainy morning last November, apparently seeking help.

"I'll never have the opportunity to see her grow up, be a woman and have kids," McBride's father, Walter Simmons, told the court at the sentencing hearing.

Gerald Thurswell, a lawyer representing McBride's family, said the family was "very happy" with the sentence. The prosecution had asked for at least 17 years for Wafer, who was convicted on August 7.

"From my fear I caused the loss of a life who was too young to leave this world," he said. "From that I will carry this guilt and sorrow forever."

Carpenter argued at the hearing that her client should receive a lesser sentence because the crime was not premeditated and because he could be rehabilitated. She said 17 years was like a death sentence for a 55-year-old man because "one year in prison is like five years on the outside."

The shooting and subsequent trial drew comparisons with the fatal shooting of Trayvon Martin, another unarmed black teen who was shot to death in 2012 by a neighborhood watch volunteer in Florida.

The McBride shooting sparked protests in the Detroit area, which has a history of racial tensions.

Wafer, who testified in court that he was in fear of his life, opened his front door and shot McBride in the face with a 12-gauge Mossberg shotgun, telling police he believed someone was trying to break into his house.

Wafer told police his weapon went off by accident but prosecutors convinced a jury that not only did Wafer intend to kill, he had previous experience with firearms and had other options to resolve the situation.