Posted by MIKAELA PORTER and DAVE ALTIMARI on Wednesday, August 27, 2014 Under: #EssexCounty 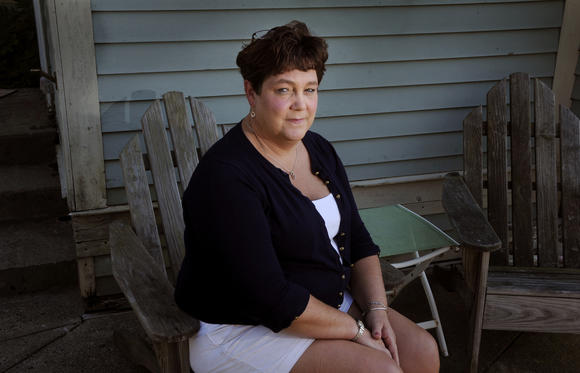 Barbara Crowley, a St. Francis Hospital nurse and the mother of seven children, sustained injuries to her right arm and right leg when she was arrested in December of 2011 by an Enfield police officer. She has since undergone surgery on her arm and continues to suffer from a torn ACL in her right leg. Her lawyer has filed their intent to sue the town over the incident. (STEPHEN DUNN / Hartford Courant / August 26, 2014)

ENFIELD — Barbara Crowley and her husband, Patrick, are widely known in the community through Patrick's 10-year stint on the town council, the couple's dedication to youth football and the fact that their seven children attended town schools.

But now Barbara Crowley has joined a list of residents who allege that they were the victims of excessive force by police Officer Matthew Worden. She is the fifth person to file a notice of intent to sue the town after encounters with Worden, who has been the subject of 17 internal affairs investigations involving civilian complaints and is currently on paid administrative leave.

It was an argument and subsequent encounter with police the day after a 2011 youth football banquet that led to Crowley's arrest, she said in an interview. She has notified the town that she plans to sue, alleging in documents filed with the town that Worden's actions and those of other officers resulted in her sustaining a broken leg, torn knee and elbow ligaments and emotional trauma.

The banquet was held at a hall owned by the Mount Carmel Society, whose president is Police Chief Carl Sferrazza, a childhood friend of Patrick Crowley's. Sferrazza declined to comment.

[Get Your Newspaper Delivered To Your Inbox Every Day with eCourant]

"Barbara is the equivalent of the church bake sale lady and she ended up with broken bones and needed multiple surgeries after her encounter with Officer Worden," said her attorney, A. Paul Spinella.

The encounter occurred on Dec. 14, 2011, the day after the Enfield Ramblers Youth Football League banquet. Crowley said in the interview that she had returned to the hall to pick up party balloons when she was confronted by a member of the society who complained that the football group had left a mess at the facility.

Crowley said she brought her balloons and party supplies out to her van, where her 10-year-old son was waiting in the car. Crowley decided to go back into the hall and speak to other Mount Carmel Society members who were in the kitchen. Crowley said that instead of entering through the front of the building, she entered through the back door and was confronted by the same woman who accused her of trespassing and called police.

Worden was one of four officers who showed up at the hall, the notice of intent to sue indicates. In the interview, she said that while two officers interviewed the woman who had called police, Worden started questioning Crowley but kept cutting her off before she could answer him.

Crowley said that she asked Worden if she could go check on her son in the car. She claims that Worden shrugged his shoulders which, she said, she assumed indicated that it was OK to go outside.

Crowley walked to the back door and placed her right hand on the bar to the door when Worden grabbed her wrist and "snapped" her arm behind her back.

"You could hear the pop and snap," Crowley said.

Crowley said that she started yelling that he had broken her arm. Meanwhile, Worden was calling for assistance and telling her to stop resisting. Crowley said that an unidentified officer kicked her right knee, buckling it and forcing her to the ground when a third officer came over and put a knee into her back.

Crowley said that police called paramedics after the third time she asked. Crowley said that she repeatedly asked police to contact her husband, Patrick, a member of the town council at the time, to come to get her son.

Crowley said that as officers were carrying her outside, her husband arrived. She was taken by ambulance to Johnson Memorial Medical Center and then brought to the police station, where she was charged with breach of peace and resisting arrest.

She said an MRI revealed that she had a fractured tibia, bone bruising and a torn PCL and ACL in her right leg and that her right elbow had a torn radial collateral ligament and a torn tendon.

Crowley said that she has undergone reconstructive surgery of her right elbow and repair of her left knee's meniscus.

Crowley never filed a complaint, claiming that she was focused on the criminal charges against her. Crowley was given accelerated rehabilitation and, after three months, the charges were erased from her record.

The short amount of time that the judge gave Crowley for accelerated rehabilitation, which can last up to two years, was indicative of the case, said T.R. Paulding, her attorney in the criminal case.

"This was a regular suburban gal with a good strong family and no criminal record," Paulding said Tuesday.

Crowley said she sought legal advice on filing a civil lawsuit against the town but said she was told that because she had accepted accelerated rehabilitation, she could not sue.

"AR is definitely not a bar to a claim of excessive force, which is what we are making here," Spinella said.

Crowley works as a nurse at St. Francis Hospital and Medical Center and is still heavily involved in Rambler football. But she said that the encounter has left her with constant pain in her leg and a right arm that she still cannot fully extend.

"I'm not [filing suit] now because everyone else is. I have tried to get an attorney involved from the beginning," Crowley said. "The first time I saw [Sferrazza] after the incident, I told him I was going to sue."

The state agreed last week to drop criminal charges against a Windsor man who had accused Worden of brutality during an arrest that was captured on video in April.

A previous version of this story incorrectly states that Barbara Crowley's notice of intent to sue indicated she broke her arm.