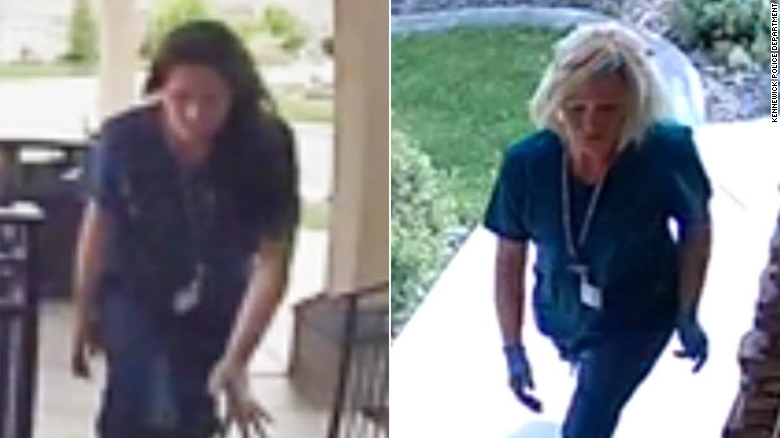 Police say these women are suspects in a porch piracy investigation..

Women dressed as health care workers are taking packages from outside residents homes in Washington state, according to the Kennewick Police Department.

Two women described by police as suspects in a porch piracy case are seen in surveillance videos wearing scrubs and what appears to be a lanyard with an identification badge. One wears gloves as she takes a package off the front porch of a home.
Kennewick Police Department said that don't believe these women are real nurses.
"The nurses we are fortunate to know only give their time, lives, and take the vitals of their patients (not their property)," police posted on Facebook.
One package stolen Wednesday was taken from the home of an actual nurse and a law enforcement officer.
"We have a home security system so I pulled up the videos," Michelle Santiago, who was out working at the time of delivery, told CNN.
"I could see the FedEx driver drop the package off around 3 o'clock that afternoon in one video and in (a following) video this woman walks up and takes it less than 5 minutes later," said Santiago.
Inside the package was a customized organizer for her husband's police equipment. Santiago shared the video with her neighborhood group and found other instances of this happening.
"Even if we had been home I don't know if I would've gotten out there fast enough to get the package," said Santiago. "She literally grabbed the package minutes after it was dropped."
Police shared the images on Saturday hoping the community can help identify the suspects.
close dialog
Next post: R&B lost three...
Previous post: Nick Blixky, an...